Dear reader I was getting sick of dessert.

I’d had so much of it recently that I was getting anxious about eating it again. The day before was my trip to Kingstreet Townhouse where I had two desserts. I needed to eat other foods, you know, like vegetables and protein. Dessert is almost a whole food. It has fats, proteins and carbohydrates, that’s how I think of it.

Harvey Nipples was doing an offer with Manchester’s Finest giving 50% off food and drink. I’d been popping into Harvey’s to check out the menu and I’d seen a Mont Blanc Baked Alaska but for some reason I’d held off going for it. Then I saw the offer? I booked a table.

I went to see Emma at the Printworks. It was a bit annoying at the start. I found the lifestyle portrayed to be horribly decadent. But I was also envious, all those trays and stands of cakes and sweetmeats just appearing when they turned up at their homes. I wondered where the money came from for them to live like that by which I mean how close was it to slavery? The society and culture were ridiculous.  At some point I started to enjoy the film. Jane Austin wanted to write an unlikeable character in Emma. It worked. She was terrible. A lot of the other characters were idiots.

I walked over to Harvey Nichols which is just over Exchenge Square. I walked past The Corn Exchange and all the restaurants that fronted it. I’ve only been to a couple of them but there are lots more to choose from. It looks very chainy though.

I got to the Second Floor Brasserie and was a small queue. I had a look at the menu and the restaurant. It was busier than I’ve seen before. I was greeted by the very attractive hostess and I said I had a table for one with the Finest offer.

There is something about Harvey Nichols. It just seems quite fancy and such a treat to eat there. “Ooh, Harvey Nick’s” 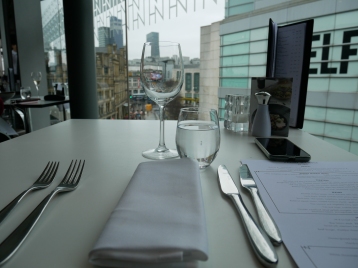 I perused the menu.

All 50% off. I kept thinking I didn’t want to take advantage too much. I thought of getting a starter then dessert for food quantity reasons as much as anything else. The mussels were the only thing that drew my eye. I don’t do steaks. I didn’t fancy rice. I was interested in the fish and chips. I chose the stone bass.

A cute waitress brought the dish. I think she was new to the industry.

I thought, “£18 for that?” It was quite a small serving. A small plate, just bigger than a starter a little bigger than a tapas dish. The smell was fantastic. The fish was great. I loved the skin. I think some people will be put off by the flesh, it’s a bit grey and “veiny”. All the other elements were yummy however the potatoes were a bit underdone I think. Maybe they were meant to be a bit hard. I think £9 was about right or maybe up to £13. Fish is expensive though.

The woman in the red dress in the picture above got up to leave. She smiled at me, maybe as a fellow lone diner. Being self conscious I thought maybe she was being patronising as I was a young looking Indian guy in a snazzy restaurant. It ruins my enjoyment when I think like that, and I often do but it’s based on experience.

The main event, for me. The mont blanc baked Alaska.

Ooooh, Ahhhh. It looks amazing. It tasted amazing. The chestnut puree, the big, splodgey streaks, was sweet and fantastic. I think the golden liquid was caramel. There’s chocolate sauce which I came to late and was gorgeous. The Alaska meringue itself was great but I was not excited by the chocolate ice cream within until the last couple of mouthfuls strangely. I would have it again. I scraped the plate with the spoon and fork.

Presentation is a bit different. I’d seen a picture of a standard cheesecake so this was a surprise. It was lovely initially but the texture was a bit bitty like if something had curdled. It got a bit much towards the last few bites. Still good. A woman a couple of tables away looked past her man at me as I tucked in to my second dessert.

The gorgeous hostess walked past and I asked to confirm if the drinks were half price too. The surly  Italian waiter asked if I wanted coffee. I said no but I would like a cocktail.

I went for the Plantation Punch. It was in focus when I got it. It was gorgeous. It had chilli liqueur on the menu and I asked if they could leave it out. They obliged.

As I left I asked the hostess at the main desk if they’d had lots of people using the MF offer. She said they had. They must have made a lot of money from the extra customers even with the 50% offer.